Think about it; social media networks such as Facebook offer a level of interaction no other outlet can offer. Consumers speak directly with the brand using comments or tweets, while brands can increase the engagement level of their clientele by responding back. For sufficiently small businesses, social media marketing pages may even eliminate the need for a customer service department, as the business may directly address customer queries on the page!

And let us not forget the friend’s list that has access to a user’s activity. So supposing if a user likes a picture or a page that may show up on a friend’s news feed. The friend may also be interested in the product and subscribe to the page. The chain goes on and your audience grows in numbers by itself! Social media marketing can work wonders!

If Not Done Correctly

Though advertisement through social media outlets such as Facebook or Twitter may seem simple on the surface, it is not so. All it takes is a little push for a multi-million dollar internet marketing campaign to go down the drain through social media marketing. Don’t believe us? Let us examine fashion house Kenneth Cole’s infamous “Boots on the ground” tweet around a year back.

Back in 2013, when the Syrian conflict was at in full swing, Barack Obama was using the “boots on the ground” hashtag to refer to any possible action by US troops on Syrian soil. Designer Kenneth Cole decided to implement their very own twisted tagline to try and boast sales.

As you may have guessed, the responses to the tweets were not as enthusiastic as he had hoped for.

The backlash from this failed tweet was so severe that even their established clientele turned the other cheek on them. Of course, Cole deleted the tweet later on following up with an apology, but the damage had been done. 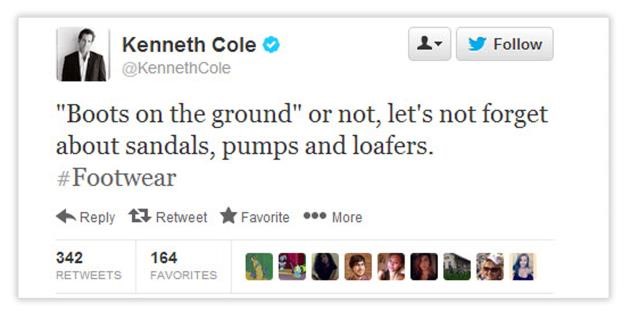 Social Media Marketing – What Can Be Derived From All This?

Like we said before, SMM is a risky game; you can either win all or lose all. Both the greatest strength and weakness of SMM lies in the fact that the brand’s page is open to the public; what is posted there cannot be taken back. You may delete it, but it would already be too late. This is why it is recommended to devise a sound strategy before stepping into the social media marketing game.

Other Posts
Go to Top